Kellogg Community College is the home of champions.

The woman’s cross-country team received a regional championship title during an Oct. 31 race at Grand Woods Park in Lansing.

Members of both the men’s and woman’s teams brought home individual titles from the race.

The KCC cross country program began in the fall of 2018 and both the men’s and women’s teams were regional champions that year.

Runners on both teams have gotten faster and dropped times over the past few meets, Head Cross Country Coach Erin Lane said. Bruins on both the men’s and women’s side could be contenders for All-American status as the teams head to nationals later this month.

“Our entire women’s team really stepped it up this past weekend with a very strong showing at our conference and regional championships,” Lane said. “We are excited to carry this momentum heading into nationals.”

The men’s team has been plagued by injuries making them unable to field a full team, Lane added. But he said he expects strong individual performances to continue at the upcoming national meet.

KCC’s women’s team placed third out of 11 teams in the state meet and the men’s team only ran four runners and thus couldn’t score as a team in either race.

Bruin runners next race at the NJCAA National Championship on Saturday, Nov. 14, in Fort Dodge, Iowa.

KCC runners are off to a quick start 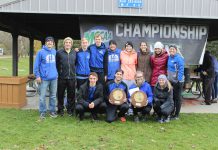