It was a chilly afternoon as I arrived at Kellogg Community College to speak with journalism instructor and Digital Marketing Manager Simon Thalmann, writer of KCC’s new children’s book “Blaze Goes to College.”

Walking into his office, we greeted each other kindly and sat down for an interview. He said the inspiration for the book came a couple years ago with the launch of the college’s Bruin Youth Programming initiative, which offers camps and other programs for kids throughout the year.

“We were looking for ways to promote that with younger audiences,” Thalmann said. “It was a way for us to serve a younger audience, an audience we had never served before. Elementary school, middle school. This children’s book is a way to reach that younger generation.”

Thalmann said the book is a way to introduce young kids to KCC and the idea of college with the hope that they might attend some youth camps or other programs at KCC. Perhaps when they reach high school they will dual enroll and eventually end up even being students at the college.

Will kids who read the book be inspired to go off to college and create something similar?

“Hopefully. When I wrote the book I tried to include as many interesting aspects that we do here at KCC that some would not be aware of,” Thalmann said. “How here at KCC you can be a police officer, and learn about that at KCC and drive a police car. Or how you can learn to become an engineer and use the 3D printer, or even become a computer programmer and create video games. That’s what you do when you come to school every day. As opposed to just coming in and watching the teacher, you’re actually coming in and doing something you would end up doing in your career.”

Thalmann said the first draft of the writing was completed in a single afternoon a couple years ago, and that the final draft is pretty close to the original. It took a couple years to find an illustrator, however, until he found KCC Graphic Design student Sara Parks, who illustrated the book as part of an honors project.

“The real hold up for the last couple of years was finding someone to illustrate it,” Thalmann said. “That was where Sara came in. When I saw her work I knew she was a perfect fit.”

The design and illustrations were completed during the Fall 2018 semester.

Depending on how the book is received, Thalmann said, they’re even considering a sequel.

“We’re considering a sequel, depending on how the book goes, set at the RMTC campus of KCC, the manufacturing campus,” he said. “And I’d like to introduce a female character for that book.”

“Blaze Goes to College” is currently being printed. A digital version of the book is available online at www.kellogg.edu/blaze-goes-to-college. 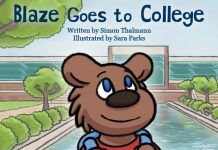 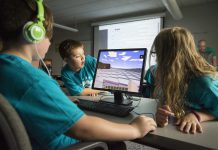