The lyrics of this ever popular song – Kurtis Blow’s “Basketball” – rang true on a recent Monday night, as the students of Kellogg Community College watched the women’s basketball team play in the Miller Gym.

It was a cold night, the air crisp and chill. I arrived at the gym around 5:45 p.m. and asked for Head Men’s Basketball Coach Gary Sprague. The first-year KCC coach had just arrived for the men’s basketball game, which would start at 7:30 p.m.

Under the roar of the crowd, the whistles blowing in our ears and the buzzer going off in the background, Coach Sprague shared his thoughts about his first season leading the Bruins on the court.

“It’s been an up and down season,” Sprague said. “We should have a few more wins than we have right now, but we still have lots of time to get our record up. We want to make the playoffs, and right now we would if the season ended today, but we have to win a few more ball games to make sure.”

As the crowd cheered in the background, Sprague appeared confident that he and his team could win those next few games and make it to the playoffs. Key to that effort will be players like sophomore guard Omar Tabb, Jr.

As of today, the Bruins’ overall record for the season so far 9-10 and the team’s conference record is 4-6, with just seven games left in the regular season.

For more information about men’s basketball at KCC, visit www.kellogg.edu/mens-basketball. 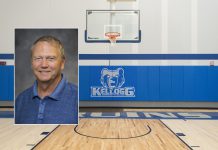