Kellogg Community College Theatre students will be stepping into a new genre with their spring musical “The Bomb-itty of Errors” in March.

The show opens at 7:30 p.m. Friday, March 22, at the Binda Performing Arts Center on campus at 450 North Ave. in Battle Creek. Additional shows will be held:

Theatre Professor Brad Poer, who’s directing the play, said the show is a hip-hop twist on William Shakespeare’s “The Comedy of Errors.”

The play “is basically what would happen if Shakespeare’s ‘Comedy of Errors’ got together with the Beastie Boys and the intro to ‘The Fresh Prince of Bel-Air’ and had a baby … a funky, goofy, head-nodding baby,” Poer said. “If you love hip-hop and wouldn’t dream of seeing Shakespeare, this show is for you. If you love Shakespeare and can’t usually stand hip-hop, this show is also for you.”

The show is new for KCC theatre students, who usually perform with a live band or orchestra. This will create new challenges, as well as an interesting show.

“I think the genre of music this show is based on is the main thing that has me excited,” Poer said. “We’ve done more traditional musicals, opera and rock musicals in recent years, but we’ve never attempted a hip-hop show before.” 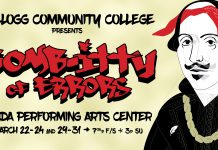 Podcast Episode 1: Theatre life and “The Bomb-itty of Errors”