On display in the Eleanor R. and Robert A. DeVries gallery of Kellogg Community College’s Davidson Visual and Performing Arts Center this month were nearly three dozen pieces of art by Tim Sykora.

The exhibit, “Tim Sykora 1958-2014: A Retrospective Exhibition,” was highlighted during a Fall into the Arts gallery reception Friday and closes Oct. 24.

Also highlighted during Fall into the Arts at KCC on Friday were several sculptures located on campus, including 10 installed this past summer. Sykora created the untitled sculpture placed June 28 in the courtyard of KCC’s Roll Health and Administration Building.

Sykora passed away in 2014 at the age of 55. He had a bachelor’s degree in art and a Master’s degree in K-12 education. He earned both of these degrees from Ball State University and was a licensed journeyman electrician and also a substitute teacher at Marshall Public Schools. Sykora sought his inspiration from compositions created by Joseph Cornell,Jim Dine and Kurt Schwitters.

Art was one of Sykora’s passions. His wife, Patrice Marquardt curated his exhibit. In his artist’s statement accompanying the exhibit, Sykora said that shadowboxing was his artistic expression most of his life, because of its “versatile and challenging means of conveying a vision, not only in terms of color and composition, but also in utilizing three-dimensional space.”

All works in the exhibit are for sale, and a portion of the money collected will go toward art education programming at KCC. 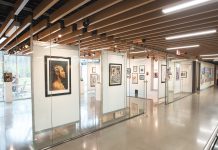 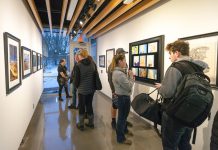 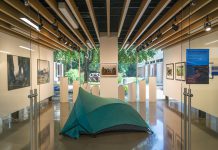